The Radio Museum was built in 2000. It was originally intended to house the radio collection of NC State Senator, Stan Bingham of Denton. While it does still house the 130 radios in the collection, there are many items that have found their way into the Radio Museum. There are Soap Box Derby Cars and other memorabilia from the late Willard Moore of Jamestown, NC. The Derby cars were raced by Mr. Moore’s sons in the 1950’s and 60’s. One , in fact, was raced in Dayton, OH. The toy steam engine collection is on permanent loan to the Park by the family of O’Ryan Sr. and Mary Holen of Winston-Salem, NC. ON the back wall is an extensive axe collection that is on loan to the park in loving memory of Herman Wyrick of Gibsonville, NC. There are also items from the Estate of Frances Bavier, who starred as Aunt Bea on the Andy Griffith Show. There are too many collectibles to mention; come in to discover your favorite for yourself. 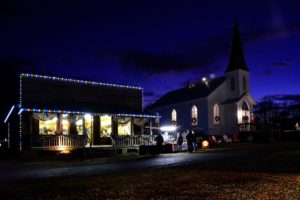