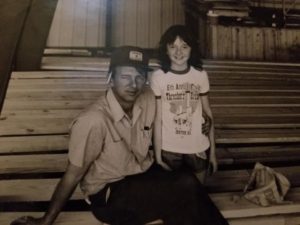 History of the Denton FarmPark

In 1970, Denton FarmPark’s Owner, Brown Loflin was driving and came upon a local rescue squad member who was having problems with a lighting generator. A conversation ensued about where the funds for fixing the generator were located and an idea was hatched in the mind of Brown Loflin. Loflin, a lifelong resident of the Handy community, is an entrepreneur and the consummate hobbyist. He has been involved in driving race cars, flying, politics, and restoring old machinery to building the park. He is the organizer and director of the Southeast Old Threshers Reunion. As a flying enthusiast and the co-owner of an airplane he had the idea of having a “Fly-In” to help the rescue squad buy some much needed equipment. Together with the other co-owner of the airplane- Howard Latham, J 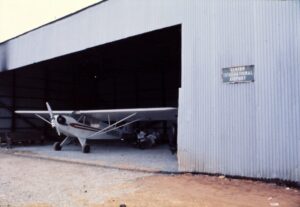 oe Graves, and other pilots, the First Fly-in was held on July 4, 1970. They offered airplane rides for a price and a meal of chicken pie and green beans for sale. It was a Smashing Success! The lines for the plane rides became extremely long that another idea was to add a demonstration of wheat threshing to ese the impatience of people waiting for the plane ride. The name of the event was changed to the “Fly-In and Threshers Reunion”. That move was very Successful, because it became evident that there were many collectors who wanted a place to show their collections. “We didn’t know what we were getting into,” Loflin recalled. “We found out there were a lot of antique machinery collectors looking for a place to gather, and a lot of people who were interested in looking at it, and we sure did get caught up in it.” A myriad of other shows were visited throughout the nation to gather ideas for what would become the area’s largest event. The Event expanded over the years from one, two, three, four, to now Five days. 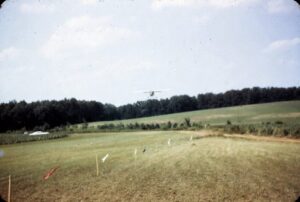 Construction over the 40 plus years has changed the Denton Airport, which was a grassed runway with an open-sided shelter as a hangar for the airplane, into a virtual small town with a 15,000 square foot exhibition building, a covered pavilion for music, a restoration shop with much equipment used for the restoring of machinery of all shapes and sizes, a second exhibit building called the craft barn, a general store, a church, machine shop, service station, doll museum, grist mill, bath and restroom facilities, and other structures for dispensing food and beverages. Recent Reunions have brought 55,000-plus to Denton FarmPark.

The Steam Shovel was brought to Denton FarmPark and Painstakingly restored after being used as a fixture on a billboard in Harrisonburg VA in 1976. It is a popular exhibit. The original shovel operator was Mr. Willard Moore who passed away in March of 2011. 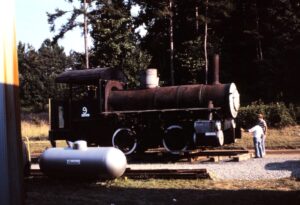 In 1979, a steam locomotive was Purchased from Dave Bernhardt and Associates in Mt. Pleasant, NC. It was then brought to the Denton FarmPark from Burnsville, NC.  It was restored along with three passenger cars, a tender and a caboose. The path of the railroad Tracks was prepared and placed on the ground with the help of Fred Russell, Charles Johnson, Dee wright, Howard McCullen, Danny Wagner, and of course the two Howard Latham and Brown Loflin. Latham (co-owner of the airplane) may have been harboring a desire to be a railroad engineer. Taking vacation during the Reunion, with a traditional striped cap and red bandana, he drove the steam locomotive on the park’s standard gauge Handy Dandy Railroad. “It’s hard work and hot,” he said, “but it’s also fun when I see how much it’s enjoyed by kids from 2 to 92.” The Handy Dandy Began operations at the Denton FarmPark in 1982. It is one of the more popular attractions during the Southeast Old Threshers Reunion.

In the 1980s the airplane that had been instrumental in the fly-in was parked and eventually sold to Joe Graves. Unfortunately the plane was destroyed several years later by a hurricane in Florida. Concentration on the Threshers reunion sored. Attendance increased to the point that airplanes and machinery did not mix. Airplanes were banned and the event changed its name to the present Southeast Old Threshers Reunion.

In the late 1980’s the Denton Airports name changed to Denton FarmPark to keep up with the changing emphasis. The name change came with mixed emotions. Many local people who came every year knew what was here as Denton Airport, but lots of people would not come because the word “airport” gave them the wrong impression of what was here. It was actually not an airport anymore.

The Southeast Old Threshers Reunion is a national and international event. Attendees come from nearly every state and at least one foreign country is represented. The Southeast Old Threshers Reunion plays a significant part of the Denton area economy and spreads to hotel and restaurant accommodations in Davidson County. Civic, church and charity organizations benefit from the sale of food and refreshments and other activities, and from contributions by their park for services by volunteers. 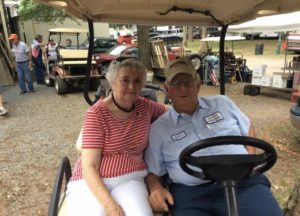 In 1989, Loflin could resist any longer! His ambition was to rescue the deteriorating buildings of a plantation which pioneer Richmond Reid built in the 1840’s on land along the banks of the Yadkin River, a few miles from the park in southern Davidson County. He obtained the buildings from Reid’s descendants, who welcomed preservation, and he and park employees worked months on preparation and moving the plantation to the park.  A “Workers kitchen” where “the help” slept upstairs and prepared food downstairs for the plantation’s virtually self-sustaining community, is the latest restoration of those buildings. Restored earlier: a “tramping barn,” where Reunion visitors see horses thresh wheat with their hooves; a granary; and blacksmith shop where you can watch a smith pump his bellows and shape iron. The plantation’s four bedroom “main house” remains to be restored. A country store and post office building, and an old country church, built in the early 20th century, were moved here from the nearby Jackson Hill community, and restored in the 1970s. The derelict George E. Sperling Mill at Shelby, NC, was brought here in 1991 and restored to operation in 1992. Its good old-fashioned, stone-ground corn meal is available from 10 a.m. to 6 p.m. each day of the Reunion. The Elliott Brothers gas station was moved to the Park in 1993 and was opened to the public in 1997. The gas station was originally owned and operated by Claude and Dewey Elliott, uncles of Park owner, Brown Loflin. Inside the gas station are antiques for sale and the old-fashioned 6 oz. Bottled Coca-Colas. The radio museum, machine shop, & doll museum are the newest additions to the park. Recent land acquisition has expanded the park past 170 acres, providing space for additional parking and camping areas and a second entrance, which has improved traffic flow.

The future: “Bigger and better,” said Loflin. It seems like we couldn’t stop now if we wanted to, and we don’t want to.” Many events call Denton FarmPark their home: Military Vehicle and Collector Show, Doyle Lawson & Quicksilver Bluegrass Festival, Antique Motorcycle Club of America’s Spring National, The Fall Festival, The Carolina Pickers Antique Festival and swap meet, Jeep Fest and Country Christmas Train. Others to come! The Park is also available for weddings, company picnics, community events, and group campouts. The Southeast Old Threshers’ Reunion has certainly made an impact on the town of Denton, NC and the surrounding towns and cities. If you tell someone you are from Denton, most of the time they will say, yes, that is where the Threshers’ Reunion is…

Founded in 1970 with one man’s Idea and became a wonderful place to make memories for thousands!

* Brown Loflin Passed away September 10th 2019. The family put up a memorial outside the church for friends, family, and anyone wishing to pay their respects to the Founder of the Denton FarmPark. 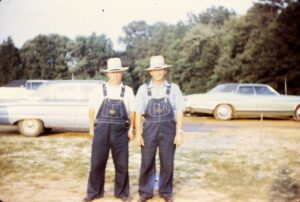 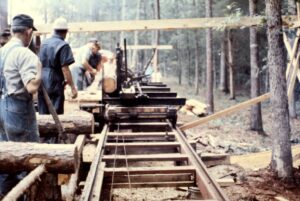 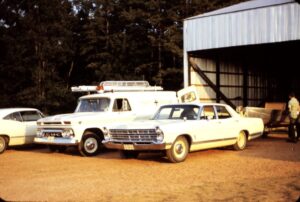 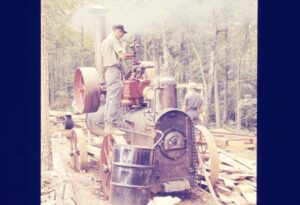 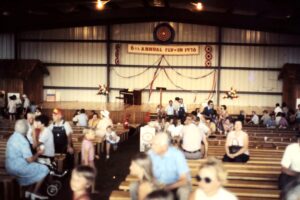 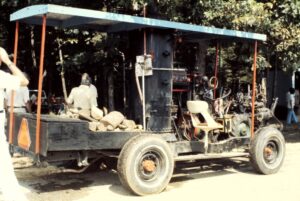 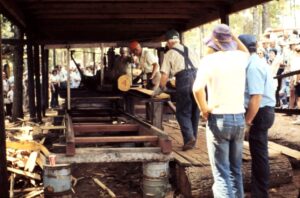 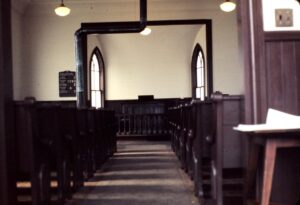 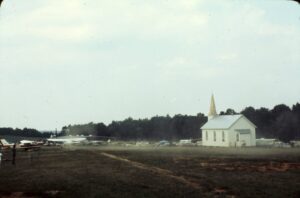 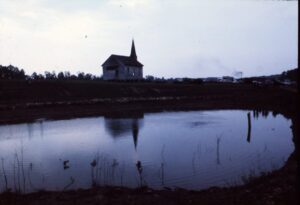 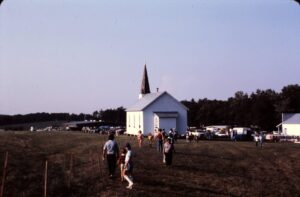 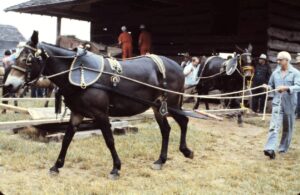 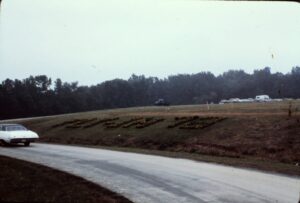 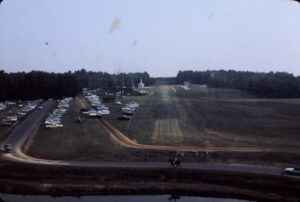 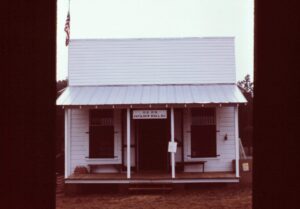 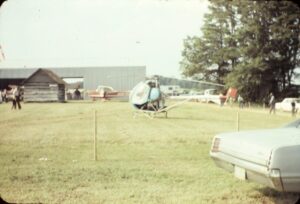 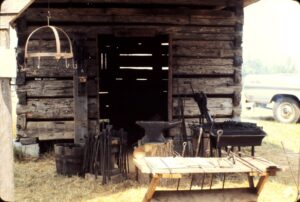 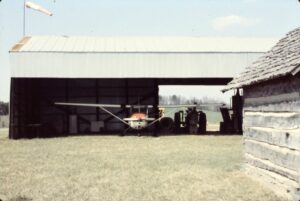